The Los Angeles Police Department suffered some embarrassing news this week as a result of a Google Ad program gone awry. An LAPD recruitment ad showed up on Breitbart, the right-wing news and opinion website, highlighting how such ad campaigns can have unintended consequences. 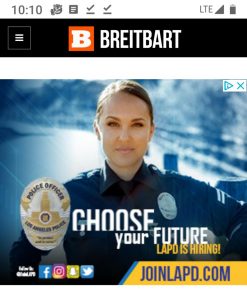 The LAPD was quick to issue a mea culpa of sorts on Twitter: “The LAPD celebrates diversity and embraces it within our ranks, and within the city we serve. We are aware that a recruitment advertisement has been circulated on a website that creates a negative juxtaposition to our core values.”

Blame it on Algorithms
But the damage was done, with the Twitter-verse chiming in with (mostly) unfavorable words for the LAPD, such as “I wonder why the algorithm associates the LAPD with Breitbart.”

And there’s the rub – it appears it was the Google algorithm that placed the ad on Breitbart, not the LAPD. But the LAPD is hardly the first organization and won’t be the last to see its ad show up in ill-advised places. A blog post at the online advertising service provider WordStream cites several examples, including this unfortunate placement of a Folger’s coffee ad.

In the LAPD’s case, how could the algorithm have made such a calculation? “It might just be that Breitbart had some keywords on their home page that matched what the L.A.P.D. has requested their ad to appear in,” Bert Huang, an assistant professor of computer science at Virginia Tech, told The New York Times. “In that scenario, through no direct intent from the L.A.P.D., it could have been inevitably matched.”

A Google spokeswoman tells the Times that advertisers have the option “to exclude specific websites or entire topics from their campaigns.” The company also has policies for where ads show up and gives “advertisers additional controls over where their ads show,” she said.

That’s all well and good but one can imagine how exceedingly difficult it may be to think of all the possible websites and topics that you may want to avoid when creating an ad campaign. (Google “managed placements” do make it possible to designate the sites where you want your ad to show up, but expect to pay a premium for that.)

For B2B companies, there is most certainly a better option: LinkedIn ads. With LinkedIn, you can get highly granular in terms of specifying the sort of person who should see your ad. LinkedIn lets you target specific titles, companies and industries, as well as geographic areas.

Want to sell only to pharmaceutical companies with more than $500 million in annual revenue?  No problem. Manufacturers based in the Midwest? Can do.

Playing around with the parameters enables you to find a happy medium between what you’re willing to pay for each ad impression and the quality of the clicks you get. Done correctly, you’ll find few wasted clicks and virtually none of the risk of showing up somewhere that could damage your company’s reputation.

Want some help creating a LinkedIn ad campaign that will deliver real results – and zero angry tweets? Contact us – we’ll set you up.